2021 through the eyes of IMF Chief Economist Gita Gopinath 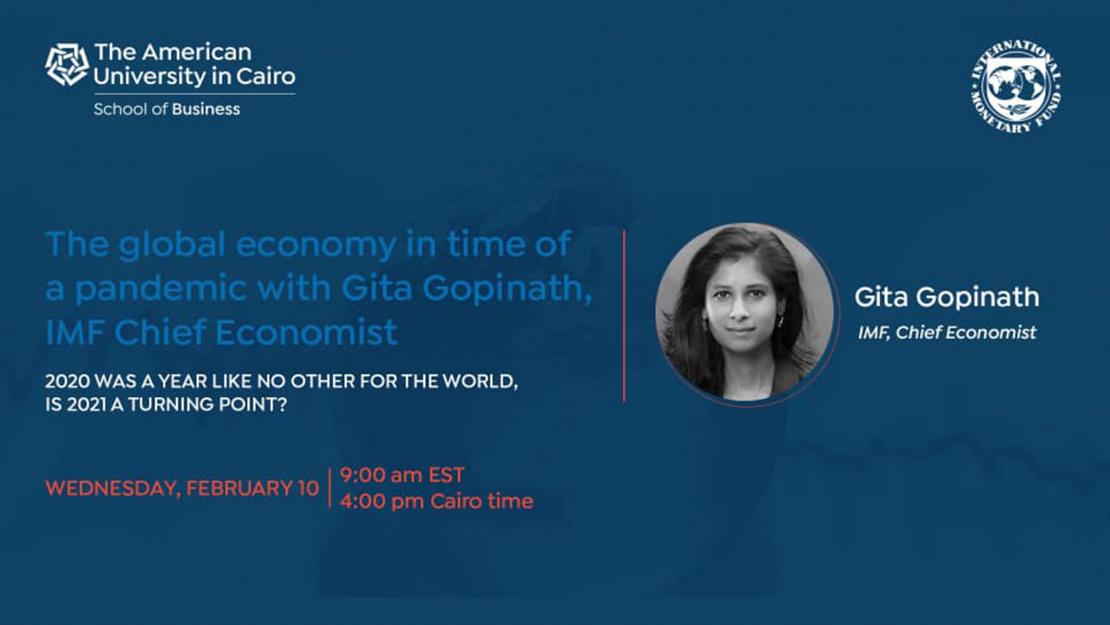 AUC School of Business was delighted to host economic counselor and director of the research department at the International Monetary Fund (IMF) Gita Gopinath on February 10 in an insightful talk titled “The Global Economy in Time of a Pandemic,” who discussed the key findings of the world economic outlook update – a report published by the IMF. The talk was moderated by AUC student Nada Bakry and featured opening remarks by dean Sherif Kamel. Gopinath spoke about the projected economic growth of the world economy in 2021 and how recovery will be determined by countries' ability to address the crisis by protecting lives and livelihoods and providing vaccines.

The event commenced with the question occupying everyone’s minds precisely formulated by dean Sherif Kamel: What does the recovery look like? And for an emerging economy like Egypt, how will the economy and the GDP grow?

“I think this year will be different from 2020. The pandemic stays, but there is a hope that the world might be able to exit this crisis,” Gopinath began her speech before pointing out that countries are recovering but at different speeds. She highlighted that the policy response has to be tailored to each country's crisis phase.

However, another point needs to be firmly taken into consideration. “You want to make policy with an eye on the future, taking the environment into consideration,” said Gopinath. While we want to allow for resource reallocation to happen, we need to ensure it is going in the right direction. It comes with no surprise that healthcare spending will remain a priority in 2021, especially with the vaccine rollout.

“We need to make sure the pandemic ends everywhere as soon as feasible. The divergence in vaccine allocation can make this goal difficult to reach,” said Gopinath.

The byproduct of the pandemic: digitization (and the resulting inequalities)

The accelerated pace of digitization, thanks to the pandemic, is now de facto. “We are going to be in a future where you are much more reliant on the digital economy,” stated Gopinath. All of this requires countries to invest in their digital infrastructure to maintain their sustainable development goals.

“We still have a large fraction of the world that still does not have access to the internet. It should be an important priority for countries to invest in their digital infrastructure, using external investments if needed,” stated the IMF Chief Economist.

Women have been hit harder than men in this crisis because the pandemic affected the service economy more than anything, which women mainly occupy. Adding to that is the fact that women were the ones who had to take care of their children during the lockdown.

Naturally, if you are a country that relies heavily on tourism and the service sector, you are much harder hit by the pandemic. Having a digitized, diversified economy helps protect your economy from crises like these.

“What is needed is ensuring much more schooling to make sure there is greater skilling for workers,” stressed Gopinath. “We always look for people who can deal with machines, not [those who can] get replaced by machines,” added Dean Kamel.

Gopinath stated that interest rates are expected to remain low for a long time when it comes to fiscal issues. “We are worried about complacency in financial markets.” 96 percent of advanced economies have interest rates below 1 percent.

On the other hand, global growth is projecting at 5.5 percent. “It’s been a long time since we’ve seen a number close to that,” emphasized Gopinath. Yet, public sector debt is at a record high.

What are the next steps? Governments need to think about how to remove the exceptional policy measures that have been put in place during the pandemic. “Typically, in the past recessions, policies were reinforced to stimulate the economy. This time around, it was very different. We were telling people to stay home and telling companies to shut down,” explained Gopinath.

When asked about Egypt’s performance, Gopinath said that the country had made a lot of progress between 2016 and 2019 when a financial crisis was expected, allowing a much stronger macro environment. Increasing the private sector's role, more governance, and ensuring inclusivity is now needed in future steps. “I think the IMF program with Egypt was extremely successful, and I think it will push Egypt to what I call ‘reform 2.0’,” commented Kamel.

Gopinath concluded her talk by saying that the two main things all countries should focus on is healthcare spending and making sure that the poor aren’t getting poorer to avoid social unrest. “From our perspective, this crisis is still not over.”

Dean Sherif Kamel wrapped up the conversation by highlighting that the quicker the vaccine will spread, the faster the recovery will be. “The whole world is learning on the go, and we can already see how creative, adaptive, and flexible it has become.”