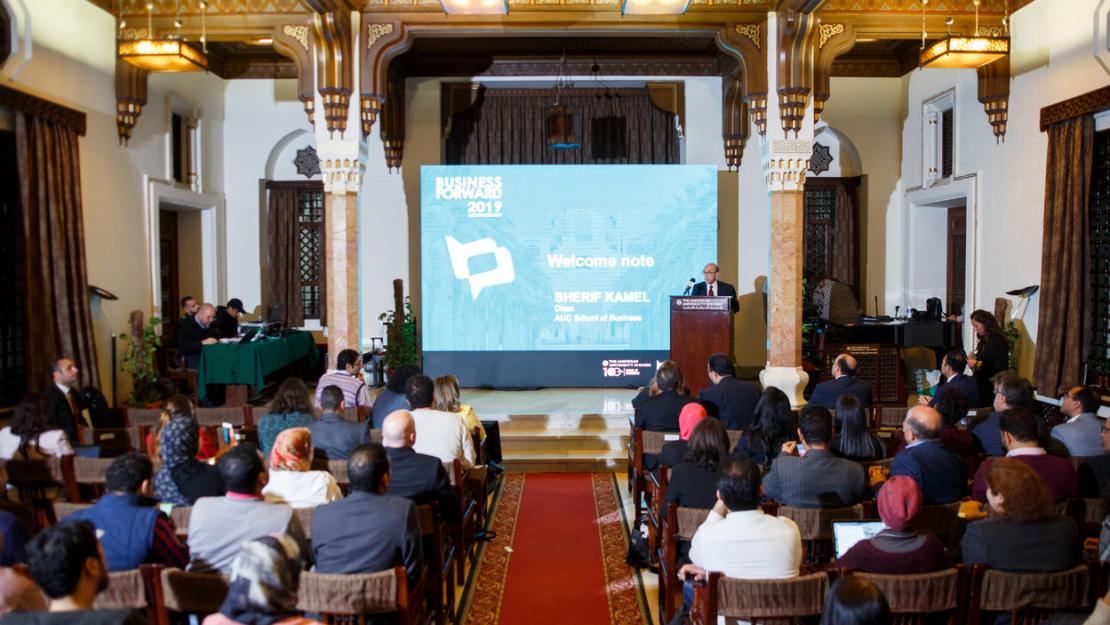 Themed around “What Comes After Egypt’s Economic Reform? A Look Forward”, the event featured insightful modern day 15-minute sessions with experts from the government, financial institutions, the private sector, academia, and international organizations.

The sessions brought about economic insights on the next steps the country needs to take after the recent economic reforms, tackling issues including but not limited to growth sustainability, the Egyptian Exchange, the importance of social justice, administrative and legal reforms, and environmental sustainability.

Setting the scene, Dean Sherif Kamel gave an overview of the journey of business forward since its inception in 2017 along with an overview of the Egyptian economic status from challenging times to a rigorous reform program that sets it as the region’s fastest-growing economies.

Among the highlights of the event, Ghada Labib, deputy minister of planning administrative reform gave an overview of the current steps being taken by the government to ensure sustainability in projects at hand and how they are working to overhaul the economy and reform the government administrative system. The efforts include projects on government services development, capacity building, institutional development programs, a governance center unit and updating and developing information infrastructures ranging from births and death registration systems, patient entry-exit system, development of HR management systems and more. A significant objective is also digital inclusion and integration of big data in all processes.

By the same token, Ahmed Abou Douma, cofounder of T20 and former CEO of Mobily, further stressed the role of ICT in amplifying and intensifying the gains of the economic reforms, and how it can trickle-down benefits of the reform programs to the bottom of the pyramid, highlighting that ICT ensures that economic benefits are disseminated in a transparent, cost-effective, fast, fair and efficient manner and ought to be the major orchestrator for all ministries in all areas.

Providing an overview of the other side of the spectrum, Tamer Hamed, vice president, Levant, and North Africa, P&G spoke about how corporates can reinvent themselves to ensure growth in uncertain times, advising corporates to transform crisis into winning through facing reality and having the tough conversation with themselves, adopting organization as a key business strategy, fighting short-term temptations and be willing to look past the short-term wins for the bigger wins and be obsessed with capabilities and people fittest to the role with the right attitude.

On another note, Sherif Hamdy, senior operations officer at The World Bank discussed the roles that international donor organizations will play in the Egyptian economy and touched on how the excessive regulations and legislations of the government are acting as a barrier to entry for businesses, while Aly Shalakany, partner at Shalakany Law Film, spoke about how future legislation support the ease of doing business in Egypt and the global best practices that are important for moving forward with the Egyptian economy, such as the use of ICT technology to optimize the process, the pace and speed of the whole process in terms of time consumption, openness to the public and more.

Overall, “Egypt has a good evolving economic story”, as Dean Sherif Kamel contemplates, adding “but it is important to realize that transforming an economy is a journey and never a destination, and Egypt is surely back on the right track and on a more sustainable path.”

Two years ago, Business Forward, the AUC School of Business knowledge portal was launched, focusing on giving in-depth insights into economic and financial developments, advancing the coverage of business news and issues in Egypt. Since its inception, 260 pieces of content have been published, including both articles and short 2-minute videos straightforward and easily digested by all.

For a glimpse of Business Forward 2019 Anniversary event click here, while exclusive coverage and one on one interviews with esteemed speakers can be found on the portal website www.businessforwardauc.com