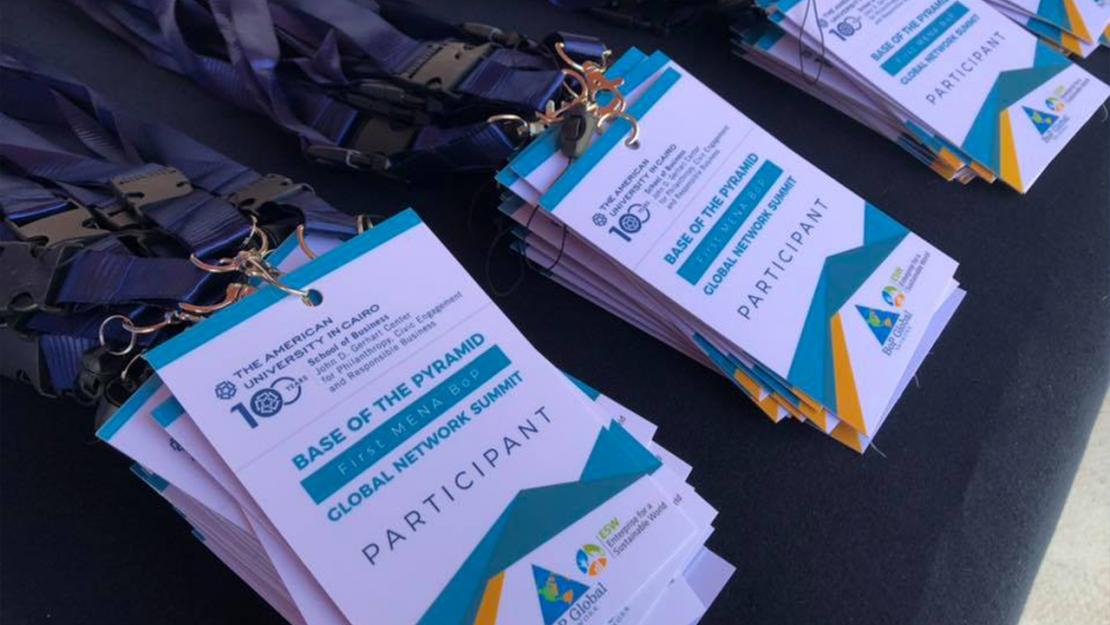 During the first three days of October, the John D. Gerhart Center hosted the Base of the Pyramids Summit in a joint effort with Enterprise for a Sustainable World (ESW) and BoP Global Network Lab, who joined forces to build a strong ecosystem for BoP communities in Egypt.

The base of the pyramid, economically, refers to the poorest two-thirds of the economic human pyramid. With their status, society tends to overlook the fact that these individuals are customers, suppliers, strategic distributors, retail partners, and even entrepreneurs. “What we’re trying to do here is to talk about the 67% of Egyptians that are earning less than $3 a day. These people have a lot of ideas, so the theme is community-led initiatives”, emphasized Ali Awni, director of the John D. Gerhart Center in his introductory statement.

The conference addressed such issues and raised the flag on the capabilities and potentials of the BoP community. “You can see there’s a logic to this idea of packing up rich people’s products and selling them to poor people but that’s probably not the best way to think of the BoP, so we’ve got to move on from that”, asserted Stuart Hart, president and founder, Enterprise for a Sustainable World.

The main theme of the summit was community-based frugal innovations; frugal innovations that are led and owned by the community to solve pressing societal problems. Under the umbrella of this theme came four subthemes: grassroots innovations, schooling at the BoP, affordable housing, and access to health Services at BoP.

The three-day conference brought about expertise from different parts of the world to meet with selected Egyptian BoP communities in order to share experiences, showcase best practices and explore opportunities of partnerships and localization of successful models.

Panels led by nine international speakers from Mexico, USA, UK, Singapore and India discussed topics including community-led development and collective action, BoP 3.0 versus BoP 1.0 and 2.0, grassroots development and sustainable communities based on the cases of Honeycomb and Drishtee, community-led development cases from Egypt based on the cases of Dandara Cultural Center and Neqada CDA/PRIME, Essilor’s mission to save vision, clean sanitation, schools for the poor, and more.

The summit was designed in a non-traditional approach, allowing for effectiveness in terms of impact. The initial two days were open to the wider audience of around 100 attendees from Egypt, Kenya, and Jordan where the traditional panels-conference approach occurred, while the last day pursued a roundtable format and was by invitation only to ensure more focus in scope and purpose.

For eight decades now, the School of Business has been serving the region in economic, management, and business education. Furthermore, we have been involved in a range of community-based projects, including our membership in the BoP network. However, our delight this year is exceptional in that we hosted the first conference in the region, as stated by Dean Sherif Kamel. We truly hope that this conference brings about sustainable growth and strong development initiatives.