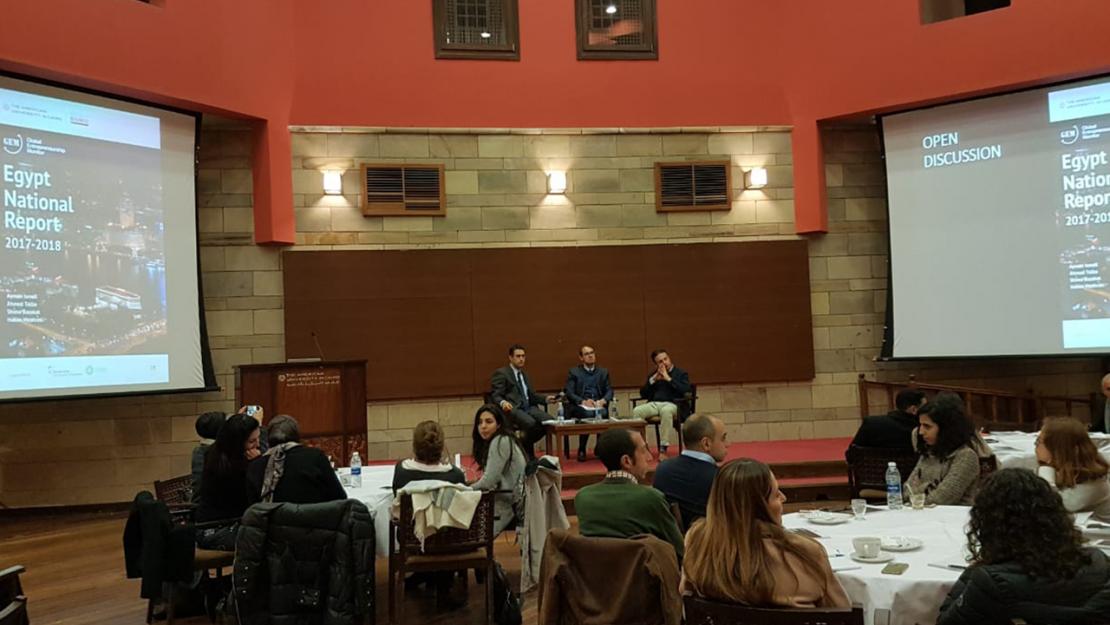 The report presented a detailed examination of the behaviors, motivations, and attitudes towards entrepreneurship within the country as well as different aspects of the entrepreneurship ecosystem in Egypt making it a valuable resource for policies and programs. GEM is considered the most authoritative and informative study on entrepreneurship in the world today, with most regions of the world represented.

“GEM as a study started in 1997, through academics in Babson College and London Business School, the first report started in 1999 and that had only 10 countries, this report is the eighteen report 54 countries in it.” Stated Ayman Ismail, Abdul Latif Jameel Endowed Chair of Entrepreneurship, while providing a brief overview of the history of the GEM report, “there are more than 112 countries that participate in GEMs though many countries do not participate on annual bases.” On the scale of the report, he added that “the study now represents 68% of the world population and 86% of the world GDP so it’s pretty much a comprehensive study”

However, the report also highlighted some important concerns pertaining to the rate of business discontinuation in Egypt, which has increased alarmingly over the past years, from 2.7% in 2010 to 10.2% in 2017 (ranking 1). While "women participation in early-stage entrepreneurship is 29%. Meaning one out of every 3.5 entrepreneurs is a woman. This is worse for established businesses; where women business owners are 19% meaning one out of every 5 business owners is a woman." Explained Ahmed Tolba, Associate Provost for Strategic Enrollment.

While Egypt’s entrepreneurship ecosystem still ranks low, compared to global averages, there is a positive improvement trend, albeit slow. Most measures have shown noticeable improvements between 2015, 2016 and 2017, such as access to finance, government policies support and relevance, entrepreneurship education at school and post-school stage, internal market dynamics, market entry regulations, and cultural and social norms.

On the importance of taking stock of the entrepreneurship ecosystem and monitoring its progress, Ahmed explained that “the role of the ecosystem is to identify the problems that are in the business ecosystem, that requires policies for them to facilitate. So that when we have the need and we have the push, it’s not lost because of these constraints. policies should facilitate and allow the momentum to flourish”

GEM is the biggest worldwide study on entrepreneurship, started in 1997. GEM provides an annual assessment of entrepreneurial activity, aspirations, and attitudes across more than 100 countries at different levels of economic development. It examines the factors that contribute to an entrepreneurial climate as well as the links between entrepreneurship and economic growth. Each year, a team of researchers in participating countries conducts its own independent investigation of domestic entrepreneurship using the same methods to ensure quality and comparability of data.

The School of Business committed to the enhancement of the entrepreneurial ecosystem in Egypt, the GEM Nation Report is a valuable resource for documenting and shedding light on the progress and challenges of entrepreneurship in Egypt. This effort comes within the School’s obligation to develop thought leadership in the area of entrepreneurship, as a key driver for economic growth, social and economic development, and engaged citizenship in Egypt and the Arab region.