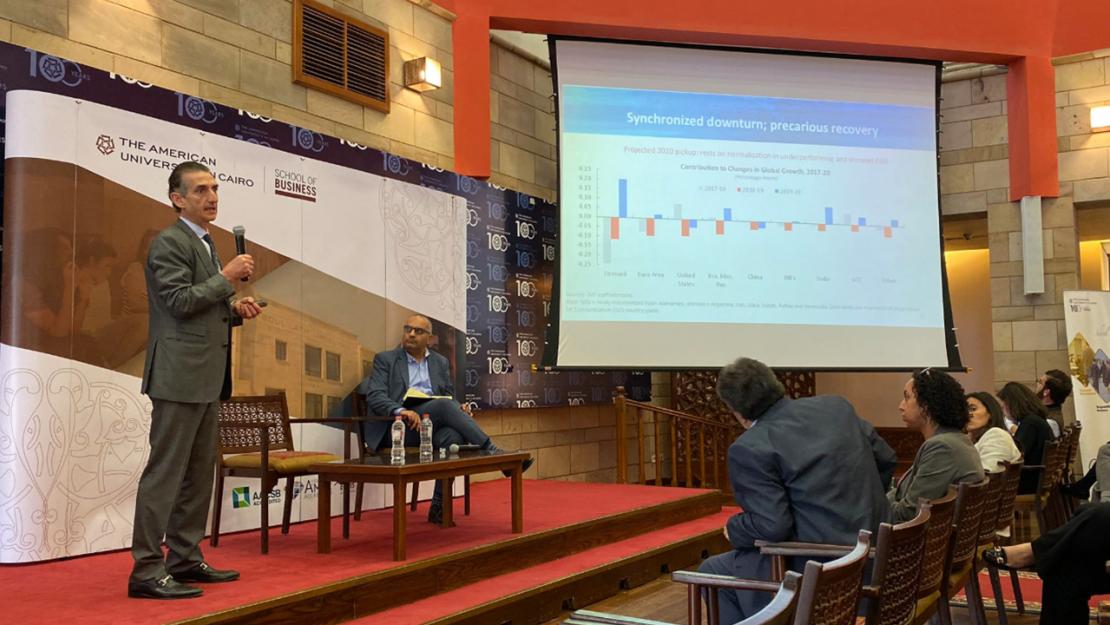 On October 29, Gian Maria Milesi-Ferretti, deputy director, research department, The International Monetary Fund (IMF), gave a presentation on the IMF forecasts for the global economy, based on the report released mid-October.

Milesi-Ferretti’s presentation covered several elements of the global economy forecast in-depth, including the fundamental elements influencing the global economy movement and its prospects going ahead such as the evolution of world trade, manufacturing activity, capital flows, rising trade barriers and the estimated impact of increased trade tensions.  In addition, Milesi-Ferretti discussed the main risks surrounding the baseline forecast and delivered the main policy recommendations to forestall negative risks and raise actual and potential growth. “The report is, unfortunately, a pretty gloomy one for the economy as the global growth has been the slowest since the financial crisis, although it is still a positive growth”, expressed Milesi-Ferretti.

The IMF forecast reflects that global growth is at its slowest since the financial crisis, building up a synchronized slowdown. Manufacturing is additionally facing a broad-based slowdown and downturn, with the rising trade barriers, but services activity and consumer confidence are holding up and remain resilient. The necessity of accommodative macro policies has been evident in the past years, providing vital support to general activity. In 2019, the impact of easing actions in monetary policy was +0.5 pp on global growth for 2019 and 2020, while in terms of fiscal policy the impact was about 0.3pp on growth.

However, in terms of outlook, global growth is expected to pick up modestly in the near future, as soon as 2020 and beyond. Hinges precariously on durable normalization in key emerging markets currently underperforming or in severe stress are further expected, while advanced economies are expected to slow toward modest potential growth rate compared to 2018.

Coming to the risks accompanied by the forecasts, these include that stress may fail to ease in key emerging markets, trade tensions could escalate with associated elevated poverty uncertainty, financial market sentiments could deteriorate giving rise to a generalized risk-off episode, geopolitical tensions, domestic policy uncertainty, conflict and climate change could severely weaken all prospects, particularly in vulnerable countries.

Milesi-Ferretti concluded with addressing the significance of SMEs to any economy before opening the floor to questions, emphasizing: “Establishing and enabling of small and medium-sized businesses is absolutely essential; reforms that go in the direction of gender diversity and labor force participation are generally helpful.”

The event was one of numerous in the series of events the School has held with IMF, as proclaimed by our associate dean of graduate studies and research, Samer Atallah. The School consistently invests wholeheartedly in events that lead to a general awareness and mindfulness on the status of the economy and ways to contribute, especially originating from a reliable and solid source such as the IMF.