Launching the Egypt Impact Lab (EIL): A Step Towards Informed Policymaking in Egypt 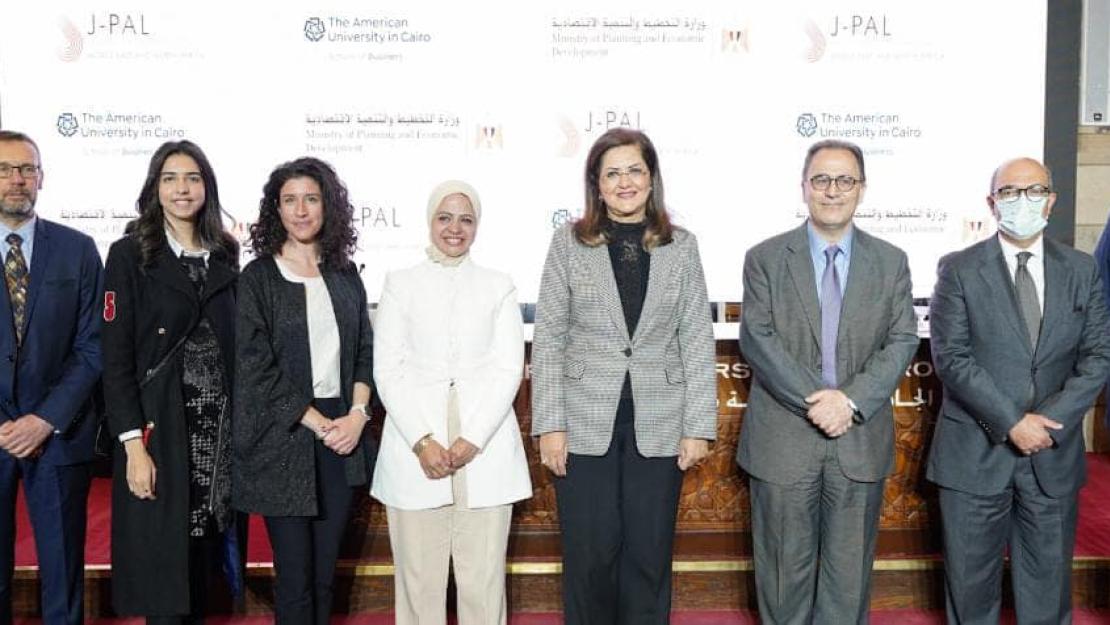 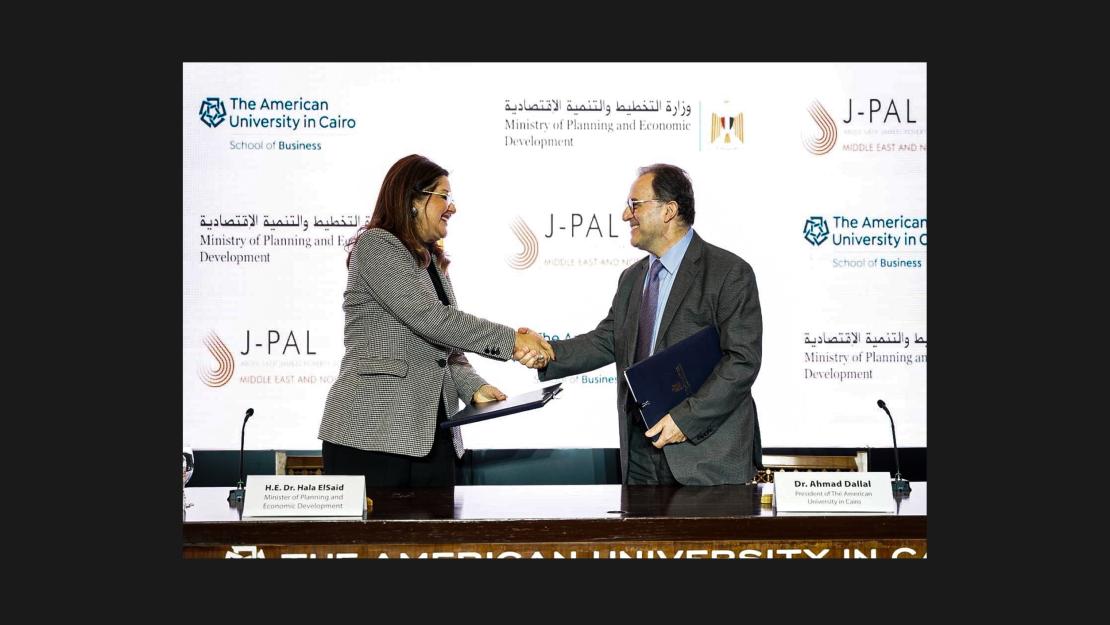 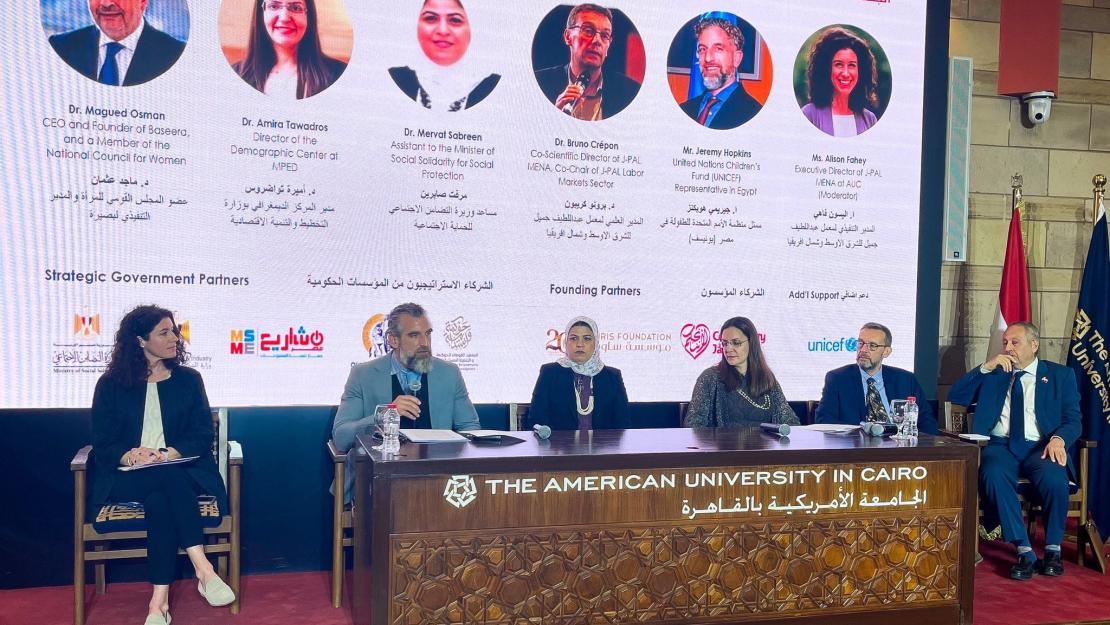 To expand its work and strengthen its collaboration with government entities on evidence-based policymaking, The Abdul Latif Jameel Poverty Action Lab Middle East and North Africa (J-PAL MENA at AUC) launched the Egypt Impact Lab (EIL) in collaboration with the Egyptian Ministry of Planning and Economic Development. EIL aims to improve the lives of those within the Egyptian community who are impoverished, by promoting a culture of evidence-based decision and policymaking within social organizations and the Egyptian government. Some of the EIL’s main areas of focus will include social protection, which constitutes the alleviation of poverty, family development, and female empowerment in the Egyptian community.

J-PAL MENA, based at the AUC School of Business is primarily devoted to conducting randomized controlled trials and rigorous research in the MENA region in order to provide policymakers with the necessary findings on which they could base their policymaking process and thus enact effective, evidence-based policies. In addition, J-PAL aims to train social and non-profit organizations on the ability to collect and utilize well-founded data. This would help ensure these entities allocate their limited resources to the right initiatives that yield the highest levels of positive social impact.

During the launch event, held at the AUC New Cairo Campus on March 17, 2022, several keynote speakers, as well as esteemed panel guests, expressed the importance of supporting EIL’s work and shared several insights relating to the social initiatives that are currently being implemented in Egypt.

The importance of evidence-based policymaking

The speakers agreed that to have policies that produce the best possible results, they must have a rigorously tested basis. Ahmad Dallal, president of The American University in Cairo, illustrated how EIL aligns with this principle by stating:

“Today marks an important step in moving towards informed policy in Egypt. The Egypt Impact Lab will be taking the work done by J-PAL MENA further and we hope we can become an example for other countries seeking to promote policy innovation and effectiveness.”

In similar regard, Abhijit Banerjee, Nobel laureate and director of J-PAL, explained how J-PAL’s work is most fruitful when governments recognize the importance of basing policies on evidence.

“When governments sense that critical decisions would be made better if they were informed by evidence-based policy, that is when our partnership would be the most useful and effective,” Banerjee stated.

H.E. Nevine El Kabbaj, Minister of Social Solidarity, also expanded on this conversation. “I consider the lack of timely, reliable data and evidence as a major obstacle towards developing adequate policy responses,” said El Kabbaj. This implies the necessity of basing policies on considerable evidence.

Speaking on behalf of H.E. Minister of Planning and Economic Development Hala El Said, Ahmed Kamali, Deputy Minister of Planning and Economic Development, highlighted that “the importance of evidence-based policy emanates from the actual purpose of public policy: to assess citizen’s needs, efficiently improve living standards and deliver a bright future for upcoming generations.” He further elaborated: “This necessitates drawing upon a wide breadth of systematic evidence and conducting rational analysis to enhance government effectiveness and impact.”

Active collaboration between entities can cause synergistic problem-solving and increased effectiveness for all parties. This was emphasized by H.E. El Said as she explained that one of the main roles of the Ministry of Planning and Economic Development is to help coordinate and facilitate interactions and partnerships between nonprofit and social organizations so that organizations have alignment in terms of goals, which in turn, as she illustrated, causes the positive societal impact to be much larger due to these partnerships.

George Richards, director of Community Jameel, a global non-profit organization advocating for  scientific advancement in order to address relevant challenges faced by global communities, also shed light on this topic by stating that “partnership is absolutely critical,” adding that “[referring to the keynote speakers, panelists, and guests] I believe that this community of practice is one that spreads between the arms of the Egyptian government and institutions like J-PAL, AUC, and other partners such as the UNICEF.”

He also elaborated that

“This community of practice builds links of strength between one another and creates an overall environment, which generates even more evidence [as opposed to each entity on its own] and drives an increased emphasis on the importance of evidence at the heart of policymaking.”

In summary,  EIL aims to promote a culture of collaboration between entities and its launch will propagate evidence-based policymaking practices within the Egyptian government as well as non-profit organizations.