One on One Feature with Angus Blair; Global Finance Magazine’s Emerging Markets Superstar 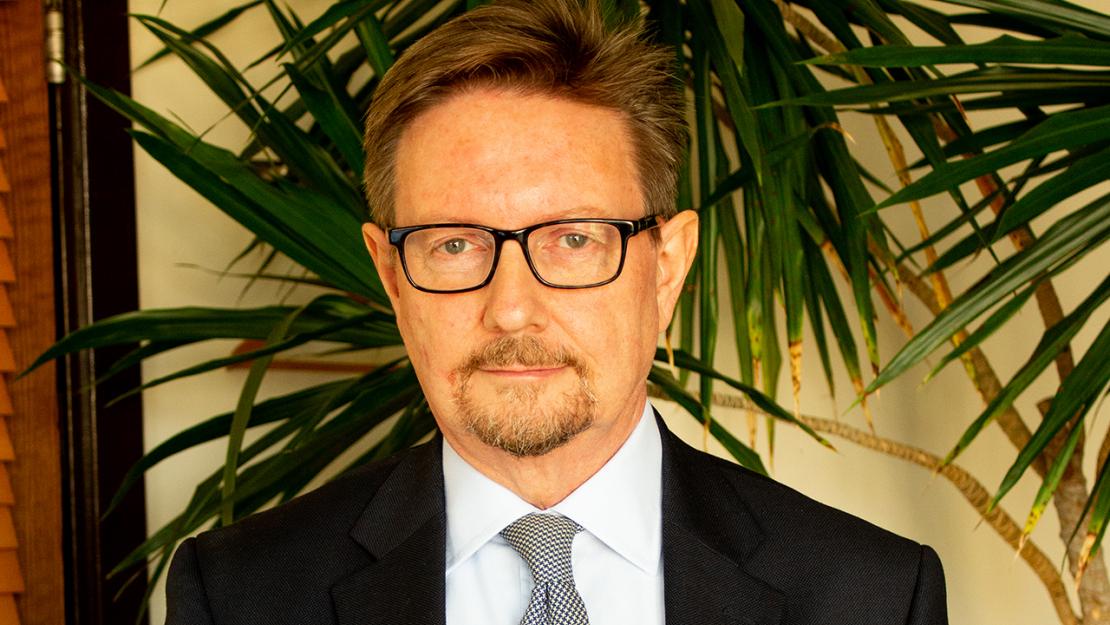 Rated “Emerging Markets Superstar” by Global Finance magazine and given the prestigious number one position for his coverage of the MENA region’s markets by Institutional Investor magazine, Angus Blair is the current CIB Professor of Practice in Banking at the AUC School of Business.

Professor Blair has a long and successful career in investment banking and financial services, with award-winning expertise of the Middle East and North African economics and capital markets particularly, leading to a deep insight of the long-term trends across the MENA region. He has worked at ING Barings and Abn Amro in London, where he led their investment banking business and sales and trading in the Southern European and MENA region markets, as well as Beltone Financial and Pharos Investments in Egypt.

The AUC School of Business sat down with professor Blair to find out more about his out of workplace personality, success story, and his experience with the School up to this point, while touching on prospective plans in the near future.

If you were to introduce yourself how would you, given your vast experience in investment banking and financial services?

I work as the CIB Professor of Practice at one of the best universities in any developing country and advise corporates to help them make efficient investment decisions.

Tell us something people don’t know about you

I have made several parachute jumps. I can make long speeches (if I have done my homework) without the need for notes, like the ones I give in the City of London about once a year. I used to do some acting in Scotland and London years ago and have written a short play which was read out by professional actors in Beirut this month.

What are your hobbies outside of the day to day job commitments?

I do not have much time, but I love traveling and learning new things, but I am asked to have many meetings outside work and that includes working dinners to discuss issues. I really like this as I continue to learn, as well as contribute to ideas and discussions. I also study film and screenwriting when I have time. Finally, I like to support living artists and I have bought art from young artists, particularly in Egypt.

How is your experience with the AUC School of Business as the CIB Professor of Practice so far?

I have enjoyed it all very much so far. One issue I discovered about myself is that whilst I know so much, it is not always that easy to teach it. I have had two tremendous teaching assistants, however, who helped to overcome some issues. That noted I think there is much I can yet do to help students be better prepared for the marketplace and I find this exciting. I led the deal to list CIB on the London Stock Exchange twenty-five years ago and it is an honor to square the circle by being named the CIB Professor. I have always had a fondness for CIB, beyond my professional admiration for the management team.

How did you manage to climb the corporate ladder?

My first position was as an investment analyst in one of the UK’s largest stockbroking firms and after two years I was appointed as Head of Research for the group, in addition to helping run the group’s discretionary client portfolios. Frankly, I was incredibly lucky to have the initial training that I had – it just could not have been better. I was on the group’s Investment Committee and I was the main contact for the international investment banks, as well as being the center of idea generation and reasoning for stock recommendations for clients, for not just the UK, but also for our clients’ international portfolios.

When I visited London for a course, I met a headhunter who arranged an interview for a London investment bank the following day and the day after that, I was offered a position to join a team covering some of the most important and largest stocks (which were under my control) and we were a prominent team, being double Extel-rated for our work. Several years later, another headhunter searched me out to join Baring Securities to commence the first coverage at Barings of the UK equity and debt markets market. Several years later at Barings, I was appointed head of fifteen countries for our activities for sales, trading, and research and for pitching for key Investment Banking deals. I was instrumental in us winning some of the first major equity capital markets and country fund deals across the Middle East and North Africa, including the first instrument in the market which allowed foreigners to invest in Saudi Arabia.

I was later approached directly by ABN AMRO to replicate what I had been doing at Barings for several years before then being approached to help develop one of the first private equity firms set up to invest in the MENA region, before being appointed as Head of Product Development and Asset Management at Al Rajhi Bank in Riyadh. After this, I was asked to join some old friends at Beltone to help take the firm forward and then later at Pharos, where I helped to transform Compliance and overall governance.

What helped you most to have such a prestigious career path and gain award-winning expertise?

One issue which I think set me apart was, and remains, my work ethic, in that I worked longer hours than almost anyone else at Barings or ABN AMRO in the working week and, in addition, I used to work about three Saturdays a month and one Sunday a month, as I had at least one market open every day. I also worked like this because I wanted to learn and know more about the economies, capital markets and investment risk of the MENA region than anyone else. I had an innate drive to be the best and, in the end, global institutional clients voted for me to be the number one Institutional Investor analyst for my work, knowledge, and contacts and, later, Global Finance magazine named me as the Global Emerging Markets Superstar one year.

How do you split up your schedule to ensure maximum efficiency in all of your different tasks?

Having been in investment banking for several decades, it has just become part of my nature and it is difficult to explain, but knowing the priorities helps to keep one more efficient and planning. It would help to do things in advance too – but it is usually just spending more time ensuring that everything gets done.

What are the major changes in investment banking/finance that you have witnessed throughout your journey?

We are on the verge of further changes, at least in using technology to replace the need for many accountants and helping asset managers, investment analysts in investment banking and research to save time by using programs to save several days on one company by having the accounts from a company slot straight into a spreadsheet, cutting the need to calculate many ratios.

AI is also beginning to be used to handle clients' queries for banks and will help financial institutions determine market trends and opportunities more quickly and possibly more efficiently. However, human relationships/interactions in finance will always be necessary, especially in pitching for deals in investment banking and the writing of reports and presentations and, basically, good interpersonal skills will also remain a vital element of the business, despite greater use of technology.

What is your overview of the Egyptian market from a financial standpoint?

I have been working on issues in the Egyptian (and the wider region) financial markets for twenty-five years and there remains enormous potential for almost every product in financial services.

What are your plans in the near future; any special projects you’re working on, new initiatives?

I would like to see that I have learned lessons from teaching last term and make the forthcoming one even better. I want to do further work in Corporate Governance as it really needs to be improved in this region and globally, as well as Corporate and Social Responsibility and Environment, Social and Governance. These issues are seeing a huge investment in management efforts across the world, but less so, so far, across the Middle East and Africa. I also want to help the general narrative in society and particularly at AUC to do much more and take the lead on climate change policies and planning.

If you were to give our current students one piece of advice what would it be?