Remembering Galal Amin: Honoring the Life of a Legend 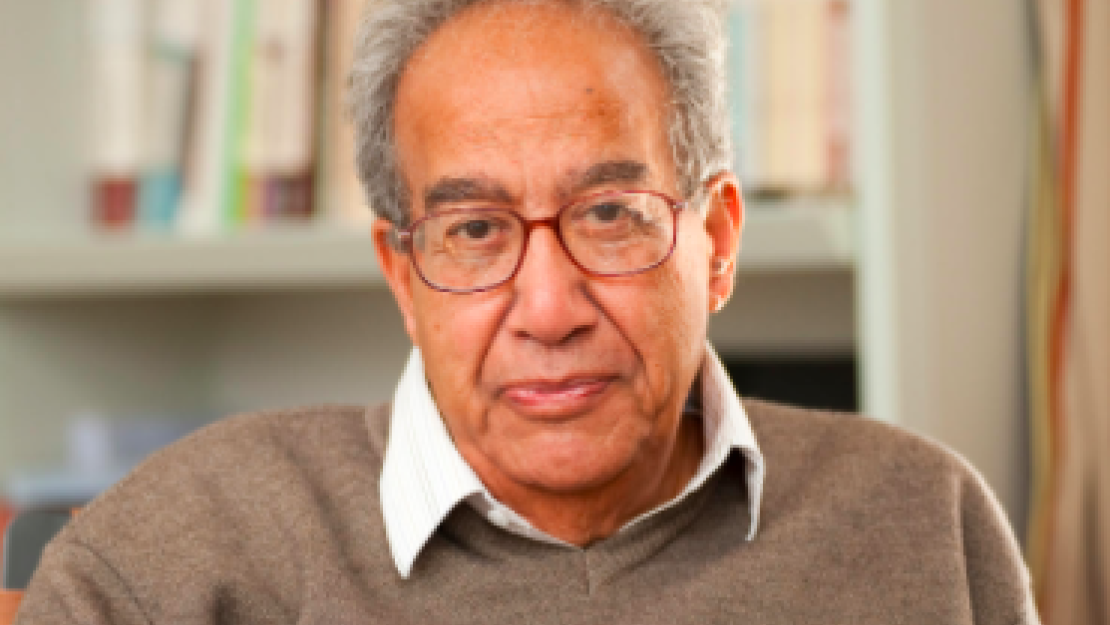 “To quote Shakespeare’s ‘Hamlet,’ I shall not look upon his like again,” said Soreya Altorki, professor of anthropology, in the Department of Sociology, Egyptology and Anthropology at the memorial service for Professor Emeritus Galal Amin.

The memorial service for the visionary educator was a chance for those who knew him to reflect on his life and accomplishments, and to share some words about his impact on their lives.

Nabil Elaraby, chairman of the Board of Trustees for Cairo Regional Centre for International Commercial Arbitration and former secretary-general of the League of Arab States, talked about how Amin went above and beyond as a teacher and as an economist. “Galal was a visionary professor of economics,” Elaraby said. “My three children were at one point his students, and they benefited greatly -- not only from his teaching, but from the way he looked at life.”

Besides teaching in AUC’s Department of Economics for 44 years, Amin was also an award-winning economist, prominent writer and commentator, and AUC Press author. However, to those who got the opportunity to meet him, he was more than just a distinguished academic and encyclopedic thinker. He was a mentor, an advocate for Egypt and, most importantly, an inspiration. The speakers painted a picture of a rare type of man –– someone who could captivate a room simply with his words and laughter.

“He could make even perennially dry subjects like microeconomics exciting,” laughed Mona Said ’89, ’91, associate professor and chair of AUC’s Department of Economics.

And just about everyone talked about how funny he was. Sherif Kamel ’88, ’90, ’13, dean of AUC’s School of Business, recounted how Amin –– author of Whatever Happened to the Egyptians –– once joked about writing a book titled, What More Can Happen to the Egyptians?

During the ceremony, speakers shared their cherished memories with the professor -- attending one of his lectures, reading one of his books or simply sitting down with him for a talk and some Turkish coffee. All speakers emphasized how lucky they were to know Amin and how universally beloved he was.

Amin was well known at the University for being incredibly popular with students and offering a unique class experience. “There was no PowerPoint, no screen and no computer. It was just Dr. Galal, a board, a marker and us,” described Yasmine Kamar '11, business director at KAPO Group and one of Amin’s former students. She related her decision to register for his 8 am microeconomics class. Despite the early hour, her mother, also an AUC alumna, encouraged Kamar to sign up for a class with Amin, and she was not disappointed by her decision. “I’m very blessed to have gotten to take part in that class. I was encouraged to minor in economics, and I took three or four classes of the whole minor with him.”

Kamar was not the only student whose major and future trajectory was strongly influenced by Amin. Both Kamel and Said also affirmed that their interactions with Amin changed their career paths. “It was microeconomics and the stylized way he portrayed it that ultimately convinced me to change to economics,” noted Said.

Kamal recounted how he went to Amin as a senior, unsure of whether he wanted to continue as an economics major. He confessed to Amin that he wanted to switch his major to business. “He said go to business, and we’ll see what happens,” Kamal remembered. “And I think that five minutes in his office actually changed my career.”

According to Danya Amin, Galal Amin’s daughter, this sort of support and encouragement was nothing out of the ordinary. “He never made me feel bad about myself,” said reflected. “He never told me what to do, and he never said I told you so.”

Indeed, one of the topics the speakers touched on most was how Amin was a source of kindness and support. Kamar described how when she asked him to write her a recommendation letter, that he took the time to write it by hand and in pencil. “And that’s just professor Amin,” she smiled. “It’s something no one else would do, to be honest. I kept that letter, and it’s something I want to hang in my house one day.”

Like Kamar, other speakers emphasized Amin’s dedication and generosity. “He was a gentleman and a brilliant scholar, but in addition he was generous, kind and devoted to freedom of thought,” related Altorki.

At times heartwarming, at times heartbreaking, the memorial service was a testament to how Amin was an inspiration to his students, friends and Egypt at large. “Some people count themselves lucky or honored to have been in one of his classes or to have been one of his colleagues. How honored am I to have had him by my side for half a century?” said Danya Amin tearfully.

As dedicated as he was to AUC, Said believes that Amin embodied the vision of AUC’s Department of Economics –– to be a hub of inspirational teaching and creative research with regional expertise and global impact. “Given who he was and what he meant to all of us, we could have simply stated that our vision was carried on by the legacy of Galal Amin,” shared Said.